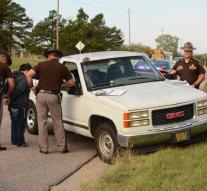 - A three- year-old American boy has saved his own life and that of his brother by taking the wheel of the pickup truck in which they were sitting. Their mother was drunk as previously fallen out of the car, police reported Thursday.

The 33 - year-old woman was driving Wednesday with her ​​twin sons on a dual carriageway near Oklahoma City. Then she fell in her drunken state on the road, devised one of her children will not have time and sat behind the wheel. He spent the pickup truck to a stop along the way. The boys are not injured.

The mother stated after the bizarre incident that she fell out of the car, because one of her sons had loosened his belt and she tried to get it fixed again. She has been arrested.