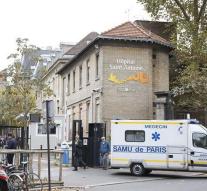 paris - A French girl of three survived a fall of more than 7 meters on Friday, reports the French newspaper Le Parisien.

A neighbor saw the girl on the balcony and initially thought that the toddler had left herself alone. Only when the aunt was worried about the help services now available revealed that the girl had made a fall of more than 7 meters.

The toddler suffered serious injuries, including her jaw and had to go to the hospital, but no longer in danger of life.