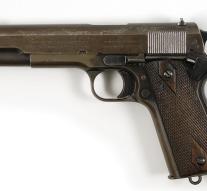 - A toddler in the US state of South Carolina has been killed in a tragic accident when the child got hold of a gun and then shot himself.

The 3-year Savion Barrow died in the local hospital after he was taken away by ambulance with a gunshot wound. According to the police, there are no suspects in the case, and this concerns a fatal accident. The police will not say what weapon the child had gotten hold of and is investigating how the weapon ended up in the child. 3- yr-old Savion Barrow accidentally shot himself in Rock Hill yesterday wa hand gun. Police investigating WCNC pic. twitter. com / nXvunwnGdn- Dustin Wilson (@ dustinbwilson1) November 16, 2015
NEW