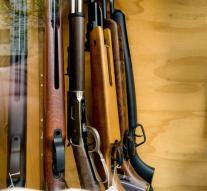 beirut - A four year old Lebanese boy killed his mother. The fatal accident occurred in southern Lebanon. The child shot the woman with a shotgun.

Last week, Lebanon was upset when a boy of eleven shot a family member of eight years, also in the south of the country.

There is hardly any control over the possession of weapons in Lebanon. It is common for people to be hit by a stray bullet. For example, when party meetings are celebrated at political gatherings, 'joy shots' are often fired. They sometimes hit bystanders.