Home / Tech / To see Disney movies via their own streaming service 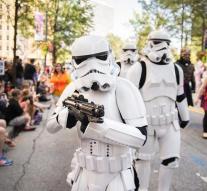 - Since 2019, Disney will feature all its movies in its own streaming service. That's what the CEO of the company, Bob Iger, told at a meeting of media and communications companies in Beverly Hills. Popular movies like Star Wars and Marvel superhero films are only visible through Disney's service.

Currently, Star Wars movies can still be seen on Netflix and through other streaming services like Hulu, one can watch superhero films like the X-Men. But if it's up to it, there's a quick change and Disney will also produce unique content for its streaming service.

'We're going to make and offer about four to five original movies a year and offer it through the app. In addition, four to five series every year, 'said Iger to attendees. The entire Disney archive, with around 400 to 500 movies, will be available through the service.

ESPN's Sport Channel, owned by Dinsey, also comes with its own streaming channel, which allows for over 10,000 sports events to be viewed. For example, users can pay for a single match or subscribe to an entire football league. 'We're going for quality, not quantity,' said Iger about the plans.