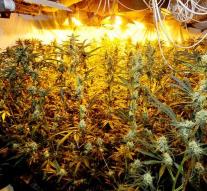 breda - Miloud against B., suspected of leading a large weed gang is Monday in the court in Breda six years imprisonment demanded. His right Mehmet C. What should the Prosecution concerns four years in jail.

The two would have led a group of a total of twelve defendants who dealt with international trade in marijuana and hashish. The gang ran after February 22, 2014 watched by liquidation in the West-Brabant Huijbergen.

B. would have ordered the murder because of a conflict with the murdered grower. The Prosecution, however, never got round the proof.

Other suspects heard demands ranging from community service to two and a half years in prison. The police did a year-long investigation into the gang. Agents watched along during drug deals, tapped phones off and followed the suspects. Thus, they saw, among other bags of weed from one to another trunk go in Bergen op Zoom, Hoogerheide, Steenbergen and Antwerp. Sometimes there was more than 20 kilograms of marijuana in the bags.

According to the prosecutor, the gang was run as a family business. Family and friends of B. perform odd jobs, no questions asked. 'Pensioners drove around with drugs. Women clipped the weed. '

The defendants themselves have often said nothing during the process. Their lawyers argue Wednesday and Thursday.