Home / World / To demonstrate gays and lesbians in Cuba 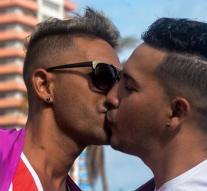 havana - In the Cuban capital of Havana hundreds of gays and lesbians have demonstrated against homosexuality and equal treatment in their country.

The protesters waved through the city with rainbow flags during their march and scanned the slogan 'revolution yes, homophobia no. '

The demonstration was led by Mariela Castro, the daughter of President Raul Castro. She has been setting for gay rights in her country for years. According to her, 'although the country's socialist government has improved in recent years, there is still a lot to do for human rights of gays and lesbians. '

The equal treatment of the groups has been the source of heated discussions for many years in Cuba. Particularly the old guard of the communist party is not for equalization of the rights.