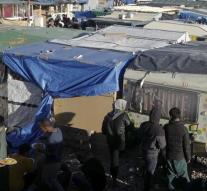 - The violence of illegal immigrants from the Calais jungle escalates. That now families are attacked at the barricades is a sad new low, see trade organization Transport and Logistics Netherlands (TLN).

Armed with tree branches and a bat struck four illegal immigrants in the night from Wednesday to Thursday the car windows of the family De Wandel from Zeeland Oostburg to smithereens. Two girls aged 9 and 12 years old were terrified in the back seat out. De Telegraaf says their father that he would have preferred to have entered a war when he had to brake for the burning barricade on the highway.

According to Markus van Tol of the ANWB did not previously before the aggression of the illegal targeting motorists. In the French port city recently raised almost daily barricades. The files thus originate they use to climb aboard trucks, so as a stowaway to stabbing across the Channel to Britain.


Sjoerd Boat TLN engaged for over a year with the problems in Calais. So far focused aggressiveness on trucks, he said.,, With bats and iron bars they threaten the truckers. It is very frightening for them. '

The illegal immigrants who want to apply for asylum in France because they want to live in Britain, first struck mainly on the way to the railway tunnel under the English Channel. But after all the safety precautions they are there now stand a chance. Boat:,, The authorities they see hundreds of meters arrive far. '

Therefore, the illegal immigrants shifted their attention to the roads towards the ferry, and now toward Autoroute 16, the main road to the coast of Brittany. TLN see more and more reports of violence.,, Unconfirmed reports talk about chainsaws. '


With the hay from neighboring fields, wood and tires are at raised overnight burning barricades. Police have increasingly heavier with it, says Boot. Calais,, currently has lower priority, because all terrorist threats. That is very understandable, but it makes the drivers though. '

In the regional newspaper Voix du Nord reported the local prefect that next month 45 officers recover to quell the violence. UNSA police union is concerned, according to the newspaper about the increasing aggression, which, according to officers often turned against motorists last week. But until Wednesday continued violence according to the Federal limited to intimidation and kicking cars.