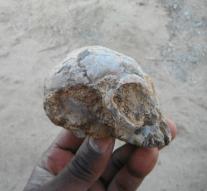 washington - Alesi did not suggest much. The monkey that lived about thirteen million years ago in the north of what is now Kenya has a head that was no bigger than a lemon. But the offspring of the animal has achieved a lot: we are ourselves.

The discovery of the skull was announced on Wednesday. 'I know how rare a find is like this one. So when we found this, I was crazy. I'm still dull, 'says paleontologist Isaiah Nengo. He gave Alesi his name because that means 'ancestor' in the language of the tribe in whose area the skull is found.

The animal, of which the sex could not be established, died when it was a year and four months old. A volcanic eruption, Alesi has probably become fatal, because the monkey was found under a thick layer of ash. That was a good fortune for the palaeontologists, because that allowed for the good conservation of the skull.

The fossil, despite its high age, is still in very good condition. It seems most like the gibbon's skull, but because the equilibrium body was less complicated, Alesi probably moved less gracefully through the trees than his offspring.

The finding further provides an answer to the question of where human beings come from. Simultaneous development in Asia may be ruled out by this discovery.

Nengo quickly wants to go back to Kenya to look for any family members of Alesi.