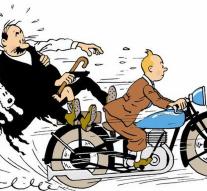 amsterdam - A special new theory about Tintin in French, that the comic figure was actually a girl 'and probably asexual', has caused a small meltdown on social media.

Vincent Cespedes, a French philosopher, claimed this shortly after reading the books with his children. On Facebook, he wrote a 731 remark, explaining why he was convinced that the cartoon figure was not a boy and also had no sexual feelings.

The 44-year-old Cespedes artist and pianist wrote, among other things, 'Tintin has always been a little girl. A redhead with blue eyes and very likely asexual. Her eyes do not show eye shadow signs, she does not have breasts and wears men's clothes. '

But many fans of Tintin do not believe in it. 'And I'm the Queen of England', joked on Facebook. 'The idea that Tintin is a woman is surprised me, but I can not care anymore,' writes another. Others just claim that the cartoon figure was 'a gay young man.'