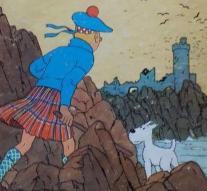 amsterdam - A rare tint album was sold through the auction site Catawiki for 68.501 euros. It's about an album from 1943 that is the 'alternative edition' of the tin story 'L'lle Noire' (The Black Rocks). Who the buyer is has not been announced.

At the request of Hergé, the artist of Tintin, an edition of only ten pieces was printed in 1943. The intention was to send the album to newspapers and magazines so that they could use it for publication. However, the album that has now been auctioned was never sent and remained in the studio at Hergé. For unknown reasons, Hergé had cut 31 pictures from the album.

A Dutch connoisseur of Tintin remembered that he had ever seen in the archives of Casterman, publisher of Tintin, a script with cut-out pictures. The expert has made pictures of that script. In the meanwhile it has been found that the clips are exactly the missing pictures from the album. Whether the albums are ever added to the album is just the question, according to Catawiki.