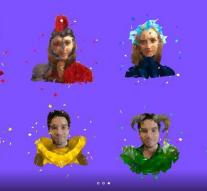 Sam van Vugt (28) and Erik Paulus (28), who study communication and multimedia design, presented the app at Avans Hogeschool in Breda. The app's appearance and language are fully tuned to gamers; Instead of 'like' press 'connect' if you like someone, 'refresh' will be used if you are not interested.

The 'avatars', either user images, have a polygon-like look typical of old computer games. 'Because of this, people are not completely anonymous as is normal in online games, but it is also not a regular meat inspection as many gamers experience Tinder,' Sam says.

The fact that the app only attracts men is a story of the past: enough women to enter virtual worlds in 2017. 'Go to Comic Con,' says Sam. 'There is a whirlwind of women. '

A pitfall for gamers in the field of data is that there are many shy people in between. 'Of course, there are many different types of people playing. But it is impossible to deny that some of them struggle with social interaction and are at home. Ordinary dating apps are insufficient for them, 'says Sam. They and Erik, a bunch of them, experienced themselves. They respond to this issue by asking users to buy questions with tokens, which are earned through commissions. With those questions, they can keep a silent conversation (a known problem with dating apps).

Sam and Erik came to the idea of ​​their graduation project by a April 1 joke of a gaming business. Despite the positive reactions, the company did not get involved. A missed opportunity for them, but an opportunity for the two students who have successfully completed their education. They are now looking for a programmer who can help the app realize.