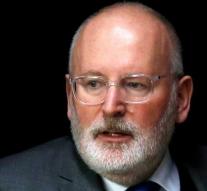 brussels - Frans Timmermans, the Vice-President of the European Commission, warns Europe against new nationalism. He does so in a statement on the occasion of the annual EU memorial day for the victims of totalitarian and authoritarian regimes.

'We must continue to tell what happened in Europe in the past, so that we do not make the same mistakes in the future', he writes in a joint statement with Commissioner Vera Jourova (justice). 'All the more so now that European standards for human dignity, fundamental rights, the rule of law and democracy are being challenged again by extremist, nationalistic and divisive rhetoric. '

The EU commemoration day is the non-aggression treaty between the two power blocs every year on 23 August, the day on which Nazi Germany and the Soviet Union concluded the so-called Molotov-Ribbentrop Pact in 1939.

'This pact collapsed Europe even deeper in one of the darkest periods. Millions of people were killed and generations of Europeans signed ', says Timmermans and Jourova. 'The names of the millions of victims of dictatorial regimes must be preserved and the memories kept alive. '