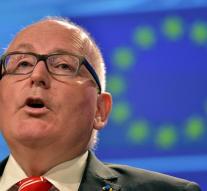 This article may cause Poland to lose voting rights in decision-making in the EU because of violation of the rule of law. It has never been used before and is known as the 'nuclear option'.

Timmermans also said that he had sent a letter to the Polish government with recommendations for controversial new legislation that aligned PiS government party with the EU's legal system. Warsaw gets one month for this.

'It is time that Poland restores the independence of the Constitutional Court and repeals or conforms to the laws reforming the judiciary or conforming to the Polish constitution and EU standards for judicial independence,' he said.