Home / World / Timmermans is officially a top candidate for EU 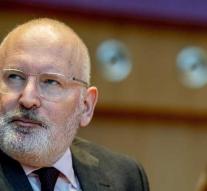 The election of Timmermans was a formality. He no longer had an opponent.

Next year, there will be European elections. After that vote, a successor must also be elected from the current President of the Executive Board of EU, the Luxembourger Jean-Claude Juncker. The European Parliament demands that it be a so-called 'Spitzenkandidat', the candidate of the political group that gets the most votes in the European elections.