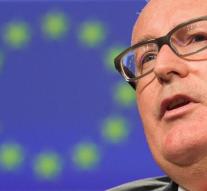 brussels - The European Commission is putting pressure on Poland in the ongoing conflict on the rule of law in the country. Brussels is not satisfied with the Polish explanation of a new law for the organization of the lower courts. Deputy Prime Minister Frans Timmermans gives Warsaw a month to adjust the law.

If Warsaw does not, Timbermans can turn on the European Court of Justice. That is the last step in the so-called infringement procedure launched in late July. 'We do not let go,' he threatened in late August.

Poland wants to introduce different retirement ages for female (60 years) and male (65 years) judges. That is age discrimination and against EU rules. Also, Brussels fears for the independence of the courts, now that the Minister of Justice can dismiss judges, or extend their mandate.