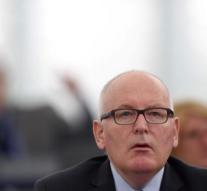 brussels - The European Commission increases legal pressure on Hungary to comply with EU legislation. Deputy Prime Minister Frans Timmermans is threatening Thursday with the European Court of Justice if Hungary does not report in a month how the country will align legislation on higher education with EU rules. In addition, he demands an explanation of a new law that complicates the work of foreign civil society organizations.

In April, the commission launched a so-called infringement procedure on legislation that would be in violation of the right to academic freedom and freedom of establishment. The law threatens to close the Central European University (CEU) in Budapest. Premier Viktor Orbán is in war with the founder of CEU, the liberal Hungarian-American philanthropist George Soros. Timmermans is not satisfied with the explanation sent by the Hungarian government.

The other infringement procedure which Brussels is now embarking upon is a law affecting certain non-governmental organizations (NGOs). Timmermans: 'We have carefully studied this law and conclude that it does not comply with European law. '

NGOs who receive more than 24,000 euros of foreign funding annually are required to register. In all their publications, on their websites and in their press material, they must disclose themselves as 'a foreign-supported organization. 'In addition, they are obliged to provide information to the Hungarian authorities about those foreign funds. If they do not, then sanctions threaten.

In June, the commission also took legal action against Hungary, Poland and the Czech Republic because they refuse to take asylum seekers from Greece and Italy. To this end, EU countries are required by law by 2015 agreements.