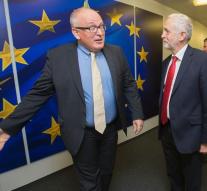 brussels - The European Commission calls on the Polish government to 'put on hold four new laws for judicial reform.' Brussels has 'great concern' that legislation limits the independence of the rule of law and considers legal action for infringement of EU law, Rules.

This was stated by Vice-President Frans Timmermans Wednesday after the end of the weekly committee meeting where legal options were discussed against Poland. Timmermans invited the Polish Ministers for Foreign Affairs and Justice this week to discuss the situation in Brussels. According to EU sources, Poland does not respond to the invitation.

The commission may send Poland to the European Court of Justice for infringement of EU rules. Poland may also temporarily withdraw voting rights in decision-making, but this option must be accepted by all Member States. However, the committee is discussing this possibility next week.