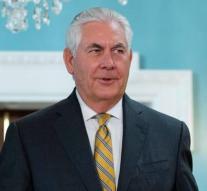 washington - The United States is not ruling out of the rule in North Korea, but at any moment would like the dialogue with Pyongyang. This is what the US Secretary of State Rex Tillerson said in Washington on Tuesday.

'We do not pursue a change of powers, do not start the reunification of the peninsula and we are not looking for an excuse to send our soldiers to areas north of the 38th latitude', said Tillerson, via the reporters on the Department targeting the North Koreans. 'We are not your enemy... But you confront us with an unacceptable threat. We must respond to that. '

Tillerson expressed the wish that the regime in Pyongyang also begins to understand at a certain moment. 'Then we would like to sit together to talk. '