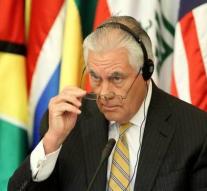 washington - The United States is continuing its efforts to reduce greenhouse gas emissions. There, the decision of President Donald Trump does not change the Paris Convention on Climate Change. That's what the US Secretary of State Rex Tillerson said on Friday.

'It was a political decision and it is important, I think, that everyone understands that the United States has a significant role in reducing our emissions,' said Tillerson. 'That happened without an agreement from Paris. I do not believe that we will do less in the future to reduce emissions. So I hope people can see it in perspective. '

Tillerson was in the past topman of energy company Exxon Mobil Corp. He strongly committed to compliance with the 2015 agreements to keep the US at the negotiating table on climate change.