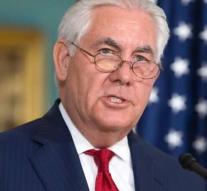 washington - The United States Secretary of State Rex Tillerson has spoken on Sunday for a possible 'additional' nuclear agreement with Iran. The existing agreement is also in the interests of the United States, he stressed, but has some weaknesses and deficiencies.

The existing agreement does not have to be broken, but can serve as a starting point for negotiations 'to address these shortcomings,' said Tillerson. President Donald Trump also thinks so, he said. Trump wants as little as he meets Congress to face new sanctions against Tehran who can cross the Iran agreement.

Trump announced a harder course against Iran on Friday. He refused to confirm that Tehran was in agreement, but did not go as far as to cancel the agreement.

The United States ambassador to the United Nations, Nikki Haley, said that Iran's rocket trials, international arms deliveries and support for terrorist groups are taking care of the US. The US does not want 'Iran to be the next North Korea,' she said.