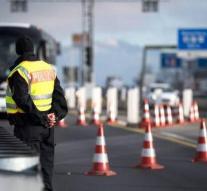 aachen - Germany controls at the borders with Belgium and the Netherlands tightened in the state of North Rhine-Westphalia following the attack Monday on the Christmas market in Berlin. The police announced Thursday.

Germany is currently a manhunt going on the alleged perpetrator of the attack, the 24-year-old Tunisian Anis Amri. Meanwhile, all other two, walked wanted persons against the lamp by the German judiciary with the tighter controls.