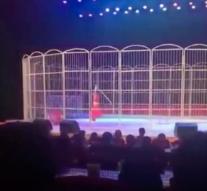 yingkou - SHOCKING IMAGES- A circus trainer was attacked by a Siberian tiger during a show in the Chinese city of Yingkou. The audience watched while the animal was hit hard with a stick during the struggle.

The horrible incident that happened on Monday was filmed. On images it can be seen that the trainer is attacked in the cage, after which another trainer is racing on the spot to release his colleague from the tiger's claws.

The trainer survived the attack, but on social media the discussion broke out about circus shows with animals. According to the theater where the show took place, the tiger was in a 'bad mood'. The animal had been running for ten days in a row and was tired. It is decided to give two shows instead of three shows per day, Daily Mail knows.