Home / Tech / Ticketscript as leaky as a sieve 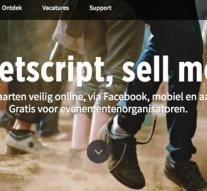 - The database service Ticketscript appears to have been as leaky as a sieve. That security researcher discovered seame Ruwhof Opgelicht commissioned by the TV program.

Ticket Script is an online application that can be used by organizers of events and concerts to sell tickets. However, it now appears that it was trivially easy to access a database containing the details of hundreds of thousands of Dutch people who had bought tickets through the system.

Ruwhof managed to gain access through an administration profile. This simply had the password 'admin' which is easy to gamble and is often used as the default password. This input he could with names, phone numbers and email addresses of between 200 000 and 300 000 purchasers of tickets.

Ticketscript says there is a data breach is no because the security researcher had access to only part of the customer data.