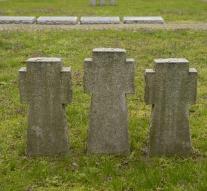 frost - Three officials from the Brussels commune of Forest have been suspended because they have regularly misbehave in a graveyard. The trio would there have regularly organized parties and barbecues. This would be consumed a lot of alcohol and were also competitions 'skull cast' account.

This writes the newspaper La Dernière Heure. A colleague of the suspended officials had to justify in June at work because of problems for college, when a book open on his colleague's practices. That story has only just come out.

With corresponding man was not bullied daily by his colleagues and he managed to successfully integrate into the group. He did not always include flat drinking in a graveyard and misbehave himself. 'Here I want nothing to do with it. This can not be tolerated. '

With pictures of the parties in the cemetery could be the man to prove his story. These show how his colleagues with a skull in his hand at the 'skull cast' and take suggestive poses on a grave. '

Also would slip three regularly that they sometimes some time alone would spend a corpse, a not so subtle reference to necrophilia.

In September, the trio suspended with pay. Tuesday the City Council will consider further on the issue.\n  \n  \n   advertisement

Relatives of the people buried have been shocked at the cemetery on the story.