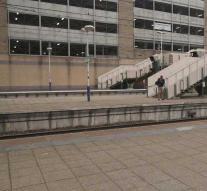 manchester - At a train station in Manchester three people, including an agent, were injured in a stabbing.

It took place at Victoria station in the center of the British city. The police have arrested a man. Whether or not there is a terrorist motive is not known.

Besides the agent, a woman and a man also suffered stab wounds. The station is provisionally closed.