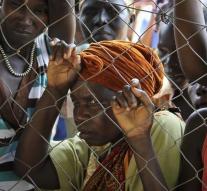 juba - The number of refugees continues to increase in South Sudan. The United Nations has left 3 million South Sudanese homes for fear of the violence that has been unleashed in the struggle for power. About 1.9 million people have moved to relatively safer areas, the remaining 1.1 million have gone abroad. The UN relief organization estimated the number of displaced people earlier this month still 200,000 lower.

The power struggle in the young African nation erupted in July again. So far, no conducted open war, but violent clashes are the order of the day. In Uganda come daily thousands of new refugees. The neighbor now captures half a million South Sudanese on. A similar number has spread across Ethiopia and Sudan.