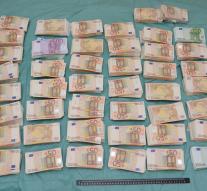 wormerveer - The amount found at the raid in a garage company in Wormerveer this week has risen to over 3 million euros. The money was found with hidden dogs in the help of dogs. The two suspects will stay for another two weeks.

Two cars were found with confined spaces. Also, parts have been found that consist of seven stolen cars. Fourteen vehicles have been seized. The garage is closed immediately after the invasion of Tuesday for four weeks.

The 34-year-old man from Beverwijk and the 30-year-old man from Zaandam who were arrested had to appear before the Judge-Commissioner on Friday. Those who are still staying for 14 days, reports the Public Prosecutor. The two are suspected of laundering and healing of stolen goods (auto parts).