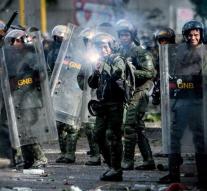 caracas - On the first day of the national strike in Venezuela three people died, the justice in that country reported Thursday. The protest against President Nicolás Maduro is led by the opposition that the people called on Wednesday to lay down the work.

Two men aged 23 and 30 have died in the western province of Mérida. A sixteen-year-old boy has died in the slums of Caracas during a collision between security services and masked protesters.

Maduro wants to form a 'constitutional assembly'. The opposition sees it as a way to turn the parliament off and establish a dictatorship. The protests have been going on since April. In total, at least 106 deaths have occurred since then.