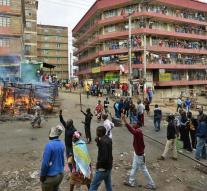 In addition to a protector and a motor taxi driver, a young girl was also killed deadly. She was looking on a balcony. Four people were shot in the hospital with shot wounds.

According to official results, the presiding president received 54.27 percent of the votes. The opposition contests its victory, although Kenyan and international observers did not find any evidence of election manipulation. After the announcement of the result, Kenyatta called his opponents on 'to keep the unity. '' In several cities, protesters walked up the street on which they hit the riot police.

Many Kenians fear a repetition of the massive violence after the 2007 elections, involving more than a thousand people.