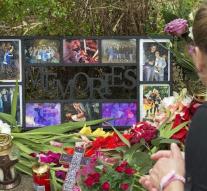 - Three of the nine dead who fell in the shooting at a mall in Munich Friday came from the same family. German authorities have confirmed.

There are three victims from an originally Kosovar family. They are between 13 and 15 years old. The family gets support from the Red Cross. So there is psychological hulpverlenening and will search for funds to bury the children in Kosovo. The family would themselves can not afford, according to the German Red Cross in a statement.

The gunman, Ali David Sonboly (18), was not known to the police and had problems at school. Police found in his house indications that the shooter was mesmerized by 'amok' murderous attacks on groups of people. So he had a home copy of the book 'Amok im Kopf' Peter Langman. The book is about why students enter into a massacre.


Archer (R) a massacre at a shopping center in Munich.

The police say that the perpetrator acted without political motive, as far as the research that could prove at the moment. Or Sonboly wanted to take revenge on some of his classmates or peers in general, the German police could not yet say.

In the shooting Friday night were a total of seven teenagers were killed. The other two dead were adult. The gunman took his own life by shooting a bullet through the head to the eye of agents.