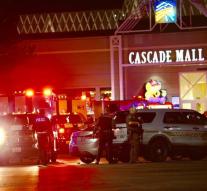 - In a shooting in the US city of Burlington Friday killed at least three people and wounded two. The shooter is on the run, police said.

According to local police, all killed victims are women. They were shot in the store Macy's. Of the two wounded there is a hit life-threatening, the other not.

About the shooter is nothing more known than it was going to be a Latino, a black shirt.

It is already the sixth shooting this year, with four or more victims (dead or wounded) in Washington State.