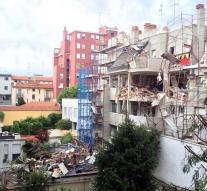 - A gas explosion in an apartment building in Milan on Sunday, three people killed. Among the dead was the mother of two girls who have been seriously injured by the blast, Italian media report.

The daughters of seven and eleven years with severe burns in hospital, the newspaper La Repubblica. In addition to the two girls are still seven wounded, including two other children.

From the third floor of the building is little. The emergency services are still looking in the rubble for victims.

This bike is no chance for thieves