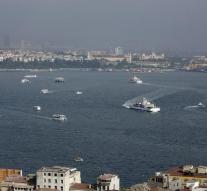 - Three members of the Turkish Coast Guard are Wednesday killed when they and their boat collided with a freighter arrived. Shipowner CAAC said that the collision happened on the Bosphorus.

Four other members of the coast guard were injured. The Coast Guard boat to hit after a collision with a ship that sailed under the flag of the Cook Islands. After the collision was the traffic on the Bosphorus silent for a while.