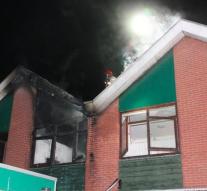 wormerveer - In a home fire in Wormerveer, three people were injured on Monday night. The three people, including one child, were taken to hospital because they had breathed in smoke.

The fire occurred on Monday night around 23.30 in a house on the Weverstraat in Wormerveer. Various emergency services spread out to the fire. The fire department reported that the fire was under control at 1.15 pm on Monday on Tuesday, but for the time being it was still to be blown away.

The house is completely burned out and two adjacent houses are also declared uninhabitable. The residents of the three dwellings are taken elsewhere.