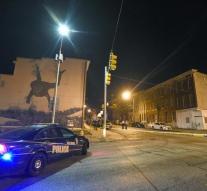 - Police in the US city of Baltimore is looking for three gunmen who opened fire Saturday and subsequently beaten on the run. Eight people were injured, including a three year old girl and her father, reports CBS News.

The police announced that the injured have been hospitalized and one is in danger. The suspects fled on foot after presumably one with a shotgun and the other two with handguns shot dissolved in the eastern part of the city.