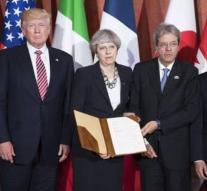 paris - In a joint statement, France, Germany and the United Kingdom have warned the US for decisions that could damage the nuclear agreement with Iran, such as new sanctions.

In the statement, the leaders of the three countries say they share the concerns of the US about Iran's rocket program and actions of the country destabilizing the region. The three want to work with America to remove those concerns.

US President Donald Trump announced a harder course against Iran on Friday.