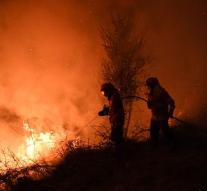 lisbon - Portugal has announced three days of mourning for the victims of natural fires in recent days. As a result, 36 people lost their lives. The Portuguese weather service expects the fire hazard to diminish on Tuesday because it's raining.

The fires occurred after a period of months of drought. Probably many of the fires are lit. In the Spanish province of Galicia, where four people died, the authorities thought that 132 fires were lit. A spokesman for the regional government spoke of 'attacks' instead of burning.