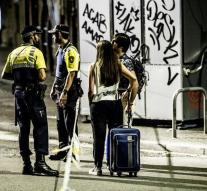 Rajoy traveled to Barcelona after the attacks and said that the city was 'hit by jihadist terrorism like other cities in the world'. He added: 'Terrorists will never conquer a united people who choose freedom over barbarity. All of Spain lives with the victims and their families. ''

The Spanish royal house announced on Twitter that a minute's silence was taken at the Plaza de Catalunya, near the area in Barcelona, ​​where Thursday evening took a bus on pedestrians.