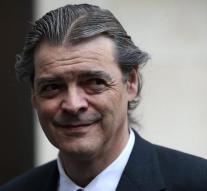 london - British Aristocrat Rhodri Colwyn Philipps (50) has to enter the cell for twelve weeks after he had rewarded a reward for a fierce opponent of the brexit. That reports several British media. Philipps was found guilty by the British court last week.

Philipps, St. Davids fourth burggraph, had converted via Facebook more than 5500 euros to those who accidentally crossed the activist Gina Miller. 'He called her a' terribly annoying first generation immigrant 'and a' bootspringer 'that had to be sent back to the' smelly jungles. '

According to The Guardian, Philipps allowed the writing of the texts, but he called his comments 'satire. 'In addition, Philipps was sentenced for his comment on an article about an immigrant with eight children who had rejected a social housing house. The aristocrat paid 2000 pounds (about 2270 euros) to the one who would cut the immigrant into pieces. '