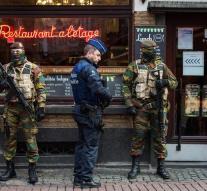 brussels - The threat level in Belgium remains in principle until the end of the year at level three, the second highest level. This means that the threat is serious and terrorist attacks are possible and probable. The situation will be continuously monitored, according to authorities.

The alert level was raised to three the whole country after the attacks in Paris. In Brussels a week later power of four levels because of very concrete information about an attack. Which was reversed after a short week to three. Still heavily armed soldiers patrolling in the capital.The mayor of Brussels Yvan Mayeur indicated Monday night that the fireworks show around the New Year in the city center just continue if the level remains at three. However apply enhanced security measures. So spectators are asked handbags or backpacks to get home.
NEW