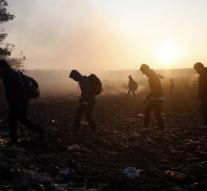 ljubljana - Also at the end of the year, every day still thousands of refugees from the Balkan route to Austria and Germany. Just on Tuesday had until midday counted in Slovenia 2000 new migrants, said Secretary of the Interior Bostjan Sefic in Ljubljana.

The day before, there were 4200 and during the Christmas weekend, nearly 11 000 people were registered. Hungary since mid-October, closed the border with a fence and the Balkan refugees route runs across Slovenia, almost 372 000 people towards Western Europe traveled.