Home / World / Thousands on the bone for protest march Hamburg 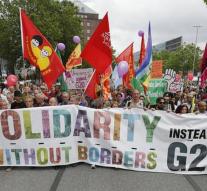 hamburg - On the Deichtorplatz in Hamburg, thousands of demonstrators gathered for the protest march 'Unemployed Solidarity instead of the G20' on Saturday afternoon. According to the German police, about 15,000 people are on their way.

The protesters walk to the Millerntorplatz. There they are expected between 16.00 and 18.00. Although German politicians have called on the participants to demonstrate peacefully, the police in Hamburg are taking into account escalation of violence, just like Friday night when left-wing rioters robbed shops and committed major destruction.