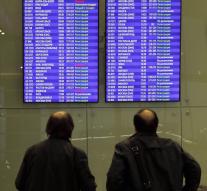 - In Egypt are between 60 000 and 70 000 Russian tourists stranded. That the Russian union of travel agencies (ATOR) told news agency TASS. The tourists have to wait for their return to Russia on extra flights or travel about through countries in the region.

By order of the Russian National Antiterrorism Committee (NAC) were from Friday all flights from Russia to Egypt deleted. This was prompted by the crash of a Russian plane in Egypt's Sinai Peninsula, probably by a bomb. The more than two hundred passengers lost their lives.

President Vladimir Putin of Russia has ordered security forces to bring the stranded passengers back. Britain previously deleted all flights to and from the Egyptian resort of Sharm al- Sheikh.

According to the Egyptian newspaper Al- Ahram Egypt loses about 70 percent of the tourism revenue by the decision of Moscow and London. Most tourists who visit Egypt from Russia. Last year there were three million. From Britain came a million tourists.