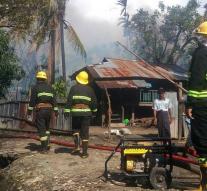 cox's bazar - More than 2600 houses have been burned in areas mainly inhabited by Rohingya in northwestern Myanmar. The government blamed an armed Muslim group who attacked posts from Myanmar security forces last week, but fiery Rohingya said the army was trying to chase them with a campaign of murders and fires.

The recent fighting in the state of Rakhine has caused nearly four hundred people to die. Over 58,000 Rohingya have fled to neighboring Bangladesh, says the United Nations Refugee Organization. Among those who have left, there is a risk of food shortages.

The 1.1 million Islamic Rohingya form a minority in predominantly Buddhist Myanmar. They are considered illegal immigrants by the authorities.