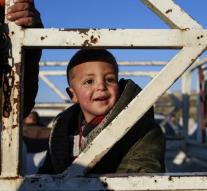 aleppo - Thousands of residents of eastern Aleppo, civilians and rebels, yet again face a cold, uncertain night. The evacuation of a part of them appeared after the agreement between the Syrian government and rebels to the departure of President Assad pursue here to get going, but eventually no one seems to have come to the city. Cause of the stagnation was an attack on buses that were headed to two besieged Shiite villages in the Idlib province there to bring people to safety.

The Syrian Observatory for Human Rights reported that his burnt six buses. The attack was carried out by fighters from Jabhat Fatah al-Sham, a Syrian branch of the terrorist organization al-Qaeda. A number of vehicles and equipment of an aid organization al-Foua and Kefraya, where they would pick in 1500 wounded, women and children, have been achieved. Their departure has been suspended indefinitely.

According to the Observatory, there are talks going on between Russia, Iran and Turkey to try to break the deadlock and the convoys of evacuees to get help on the way. Turkish President Erdogan conducted a telephone conversation with his Russian counterpart Vladimir Putin.

Both leaders were, according to Turkish spokesmen agreed that there should soon be an end to the disruption of the evacuations from the respective cities. They re also talking about a political solution for Syria and the plan the warring parties, with representatives of the Syrian government and the opposition, to bring together at the table in Kazakhstan.