Home / World / Thousands of migrants picked up from the sea 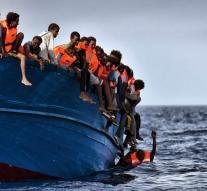 rome - The Italian Coast Guard announced Monday to have picked up about 5,650 migrants from the Mediterranean Sea, one of the largest numbers of people who were saved in one day.

They were about forty boats en route to Europe. According to a spokesperson is regrettable one dead. A pregnant woman with a helicopter transferred to a hospital in the Sicilian island of Lampedusa.