Home / World / Thousands of Iranians take to the streets 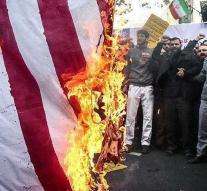 teheran - In Iran thousands of people have taken to the streets to celebrate the occupation of the American embassy and to protest against the new US sanctions. In the protests there was called 'Death to America'.

Radical Iranian students occupied the American embassy in Tehran on November 4, 1979. More than fifty people were taken hostage. After 444 days the occupation ended.