Home / World / Thousands of Greeks on the run for forest fire 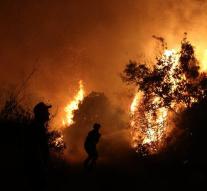 athens - Due to a large forest fires in Greece, thousands of people have left their homes. The fire rages in a coastal area northeast of capital Athens, which is popular with tourists.

Through loudspeakers, television and radio residents were called to leave immediately. According to the head of civil protection, the fire is difficult to fight. Dozens of houses have been destroyed by the fire, which according to the fire brigade forms a wall of about fifteen kilometers.

It is not known if people have died by the fire. However, rescue services have not yet been able to reach all homes.

Also fires in other parts of Greece.