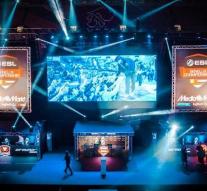 The best Benelux eSports players encountered in the popular games Counter-Strike: Global Offensive, Hearthstone and League of Legends. Fans could live live here. Those who did not have the opportunity to travel to Amsterdam could live the show live. The live stream of the games was viewed 125. 000 times online through live streaming platforms like Twitch and Facebook.

After an exciting game, Team Echo Zulu (League of Legends) and mCon eSports (Hearthstone, Counter-Strike: Global Offensive) were awarded the best Benelux eSports teams. They took a prize money of a total of 30 000 euros home.

AFC Ajax and Ziggo also organized an eSports event in the ArenA: the Ziggo eBattle: The Ultimate Clash. The sixteen best FIFA players in the world contradicted each other at the top prize. The 19-year-old Amersfoorter Dani Hagebeuk, with back number 46 of AFC Ajax, finally pulled it in.